Showing posts from June, 2018
Show all

Development of Niara: Rebellion Of the King 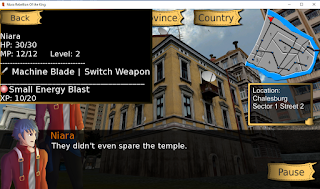 Right now at Redseed we are working on our new video game project called Niara: Rebellion Of the King. This game will be a visual novel RPG and will be released on Google Play Store in April 2019.

The progress in the development of the game has been good. We have completed the development of the dialogues, the quest system, inventory system, map system and the battle system. We need to start working on the shop system and then start creating the content for the game. This content will include the story which the game will follow as well as the different quests which the player will need to finish. We are developing this game in Renpy.

Here are some screenshots of the game: